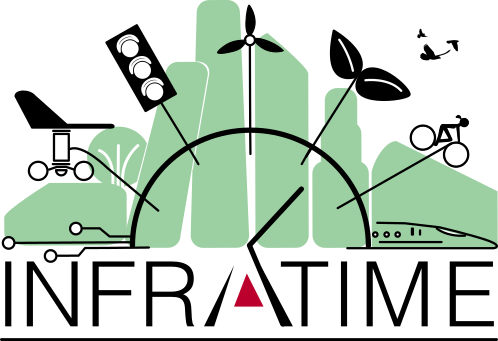 The warming planet undress the carcass of the past, the old mammoth stands up. Time and epochs mingle, somewhere in Siberia seeds which rested 30000 years beneath the thawing cryosphere started blooming. The earth is going to open up its archives, although it is not clear whether there will be readers. (Georgi Gospodinov, Time Shelter, my translation in English from the Italian edition)

Urbanisation acts as an accelerating factor of the Anthropocene (Elmqvist et al. 2021). Cities are both Anthropocene agents and at the forefront to address climate change challenges, as prominent sites where neoliberal temporalities are questioned and repurposed vis a vis planetary temporalities (Kolinjivadi et al. 2020). The European Union Report “100 Climate-Neutral Cities by 2030 – by and for the Citizens” (European Union 2020), together with the roadmap “Driving Urban Transitions towards a sustainable future” (EU DUT 2021) are setting the pace of the EU Green Deal strategy to achieve EU climate neutrality by 2050, consistently with the Sustainable Development Goals agenda.

Time and timing are inherently present both in transnational and national policies, in local urban adaptation and mitigation, as well as in the very concept of “transition”. Yet the temporal issues and the timescapes1 (Adam 1998) of such processes have rarely been addressed in the debate on urbanisation and the Anthropocene. As pointed out by the french philosopher Bensaude-Vincent (2021), the strong emhpasis on the ‘anthropos’ over the ‘kainos’ (epoch) framed the discourse of the Anthropocene by the assumption of ‘human exceptionalism’, which in turn is “embedded in the modern concept of time as a universal chronological timeline”. That perspective risks to overlook the polychronic aspects of the Anthropocene and with this paper I want to explore the co-existence of a variety of more-than-human temporalities, their interferences and synchronization, in which the modern linear time is but one way of experiencing time, among many others.

As urban transitions and climate adaptation and mitigation response are increasingly digitized in many areas of urban management, time is also materially embedded in (digital) infrastructures, and in turn shapes the temporality of transition processes. Real-time data on mobility, transports, air and water quality, energy, and other services is made available to inform everyday users, urban managers, as well as decision-makers and support short and long term planning. While accounting for a digital “heartbeat” of the city, the time apparatus of smart urbanism produces actionable data and predictions to shape urban futures. The socio-technical and data assemblage of smart urbanism – its polyrithmia, realtimeness, and casting practices (Kitchin 2019) – thus interacts with the futures produced by the “vast machine” of big data, models and simulations (Edwards 2013) that allows projecting human and environmental conditions in the next decades and centuries.

Finally, the digitization of urban processes coupled with the climate change mitigation and adaptation initiatives suggests a new relation between data infrastructures and transition management in a temporal perspective. The temporality of networked urban infrastructures and the deep time of earth transformations interact with the temporality of climate governance, policy and management processes. If we think for example to the various goals, strategies and target for reducing Greenhouse Gases (GHG) emissions to be achieved by nation states and cities, we see that there is a multiplicity of timelines, ranging from being carbon-neutral by 2035 (Helsinki), to being fossil-fuel free by 2040 (Stockholm), and being carbon-neutral by 2050 (Barcelona), while in Europe and China set the target for climate neutrality respectively to 2050 and 2060. The work of achieving this goals involves both accelerating or anticipating the efforts, and it is a work of entrainment, enacting momentum and creating synchronicity (Ancona and Chong 1996; Granqvist and Gustafsson 2016) across heterogeneous rhythms and tempos. These however does not seem to have a reference “Zeitgeber” (time giver) but seem to be built through heterogeneous ‘Zeitvermittlung’ (time mediation) resulting in an attempt to synchronize data as well as narratives to pace institutional and organizational change (Czarniawska 2004).

The temporality of urban transitions acts at a different scale. Transnational and national institutional rhythms are set for example by the SDGs or the Conferences of Parties (COP) meetings, as well as by other commitment such as the above-mentioned EU Green Deal, or the US and China national climate plans. The reports of the International Panel for Climate Change contribute to define the global time horizon for strategies and long term policies, such as the “1.5 Degrees” Special Report (IPCC 2019) setting the agenda for planetary political decisions, while the actions and protests of climate movements bend the time curve, create the momentum and the urgency for institutional efforts to accelerate or anticipate actions, to update the agenda or to direct it towards radical temporalities.

The Anthropocene produces thus a vast timescape made of several and intertwined timelines, rhythms and tempos coalescing at different scale from digital, earthly, urban and organizational interferences. This paper intends to observe the temporal issues in urban transitions particularly looking at the interplay of urban, digital and climate processes. My aim is to bring to the fore the key role of infrastructuring time in smart urbanism and urban transitions, paying attention to their material, infrastructural, and mundane aspects as well as the multiple temporalities they enact. The focus is on the idea of transition as translation, not a linear step from an unsustainable past to a viable future but a relation that reshapes and reshuffles past, present and future and articulates non-linear tempos and speed, as well as realigns institutional and organizational inconsistencies and asynchronities. The main issue refers to the role of data in this work of shaping and articulating the temporalities of transitions, at different scale and across different matters. In particular:

• How is time operationalized in urban adaptation and mitigation processes?
• How digitization affects the temporality of the urban response to the climate crisis?
• How do institutional change and organizational processes affect time infrastructuring and how is urban governance reshaped?

I will particularly focus on urban dashboards and urban transitions as time interfaces where digital, climate and organizational processes come together creating mechanisms of ‘realtimeness’, ‘longtermness’ and ‘deeptimeness’ which in turn require new ways of synchronization to respond to the climate change challenges and the critical trajectories they may take.

As put by Mattern (2015), we live in the age of “dashboard governance”, a sort of dashboardization of decision making and modeling which tends to quickly turn “perception into performance, epistemology into ontology”, establishing a new relationship between measurement and management. Dashboards are used in a variety of domains, ranging from financial flows and performance indicator, voting information, government services, industry process, urban services and health information. Sometimes, datasets are aggregated made publicly available, in other cases the dashboards are strictly individual and refer to personal data such as health or welfare issues. Instead of being overwhelmed by the data deluge, dashboard users can get relevant information at a glance in a single platform through algorithms and visualization scripts, in real time, without the need to access the source dataset. A number of problems arise from that:
<blockquote“By presenting often very complex, messy and varied data in simplified forms for consumption via a dashboard, sometimes subtle changes take place in how that data is understood. Most notably, by introducing a new emphasis on metrics, indicators and measures, it can create a greater focus on operational issues rather than longer-term strategic ones. And as with any new discipline, new types of expertise become valued, and new sources of authority become established”(Bartlett and Tkacz 2017, my italic).

Dashboards act basically as a visual analytical tool which works through the blackboxing of technical knowledge considered not relevant to be accessed for specific tasks. In other words, dashboards provide visually transparent intelligence and generate insights while based on epistemically obfuscated knowledge and algorithms.

This is especially the case of city dashboards. (Fig 1)

While supporting real-time management and making (big) data actionable and accountable, city dashboards act as time interfaces built to make data interoperable and synchronized from multiple sources. The synchronization of multiple data source takes place at different levels: first there is a horizontal synchronization from all the sensing devices dispersed in the city, for example for traffic management or air quality monitoring. Each group of sensing devices (meters, actuators, IoT devices and so on) has its own “tempo” due for example to battery life, to the frequency of information transmission, to the latency introduced by the micro delays for data retrieval within the infrastructure. Then there is the central integration within the service “silos” where data converge. The temporal and digital aspects suggests that the existence of data is made both by bits and beats whose rhythms are composed “on the way” through work of sequencing and synchronization, which may result in the creation of longitudinal patterns or other kind of time trajectories. In this sense, I consider “Realtimeness” as a specific work of work of databeats synchronization through to make measured times homogeneous and manageable through dashboards.

As pointed out by Stehle and Kitchin (2019), there are two main problems with city dashboard: the change blindness and communication of spatio-temporal variability. Change blindness refers to the “diminishing ability of viewers to identify changes to a visualisation when there is a transition between states”, especially rapid ones, while spatio-temporal variability involves the difficulty to represent historical time series data in a way that matches the expertise of users to identify urban patterns. To address both issues a set of solutions have been adopted, including control of archive and refresh timing and display.

Given the urgency of climate change challenges and the increasingly relevant role of cities in adaptation and mitigation processes, city dashboards started to include many references to environmental indicators, such as energy data, waste data, air quality data, and greenhouse gas emissions data, among others, enabling monitoring and management. The coupling between environmental and urban data generates interferences between real-time, long term and deep time, requiring further calibration of databeats. The encounter of the long-term policies and the realtimeness of multiple tempos synchronized for the everyday management of urban services introduces a dimension of ‘longtermness’ and ‘deeptimeness’ to be taken into account in the re-calibration. Longtermness is related here to what Wenzel and colleagues (2020) call the ‘rediscovery of the future’: a concept that goes beyond the linearity of planning-based futures and refers to the manifold ecological futures produced by ‘future-making practices’, “both hopeful and daunting, many of which break through the conventional planning horizon”. Deeptimeness refers instead to the earthly time assemblage and the opening up of the planet archive as in the initial quote of this paper. There is thus a second order aspect of synchronization that refer to the alignment and tuning up of realtimeness, longtermness and deeptimeness, and this is especially the kind of work in place when city dashboards meet climate change temporality, namely the work to set up and calibrate the tools and the knowledge to read, and especially activate the earth archive.

Bensaude-Vincent, Bernadette. 2021. “Rethinking Time in Response to the Anthropocene: From Timescales to Timescapes.” The Anthropocene Review, April. SAGE Publications.

European Union, Publications Office of the European. 2020. “100 Climate-Neutral Cities by 2030 – by and for the Citizens : Interim Report of the Mission Board for Climate-Neutral and Smart Cities.”

Kolinjivadi, Vijay, Diana Vela Almeida, and Jonathan Martineau. 2020. “Can the Planet Be Saved in Time? On the Temporalities of Socionature, the Clock and the Limits Debate.” Environment and Planning E: Nature and Space 3 (3). SAGE Publications Ltd STM: 904–926.

Masson-Delmotte, Valérie, Intergovernmental Panel on Climate Change, WMO, and United Nations Environment Programme. 2019. Global Warming of 1.5 oC: An IPCC Special Report on the Impacts of Global Warming of 1.5 °C above Pre-Industrial Levels and Related Global Greenhouse Gas Emission Pathways, in the Context of Strengthening the Global Response to the Threat of Climate Change, Sustainable Development, and Efforts to Eradicate Poverty. Geneva: Intergovernmental Panel on Climate Change. 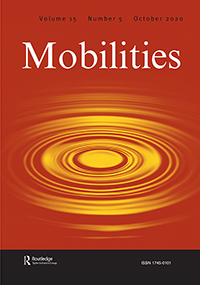 Published in October 2020 for Mobilities, the special issue On time: temporal and normative orderings of mobilities has been edited by Tobias Röhl (University of